Introducing Despino to Bent was kind of.... let's say interesting.

Famous for his kind of humour, the only thing popping up in his mind was what he actually said: "I think you really have to educate him, and you have to do it well. Otherwise, we will not even get the butcher's price for him."

Half a year later, he added: "I think that has a chance to become nice, the two of you. Don't be stupid and think that this will become an easy horse - but on the other hand, than you would feel bored anyway....."

Three years of education later, in summer 2012, Despino has passed his Squire-Test ;-) 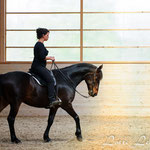 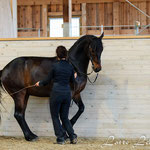 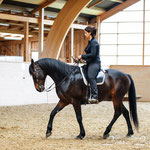 When I met Despino, he was a three year old.

My horse, very close attached to my heart, just recently died. A nice, sweet spanish gelding, that was deeper attached to me than I could have ever imagined before. After Montana's death, I never wanted to touch a horse again - until my family and friends steped in and trapped me with several coincidences.

My Gandpa, always my personal hero and with a sense of pragmatism, decided: The girl needs a new pony, otherwise she will never stop crying.....!

When I started to look at different (very nice) spanish horses, it was very soon crystal clear to me: The one, that was so special to me, to replace through another one, seemed to be more than wrong and made my heart ache.

Than I met Despino - accidently, because though I was looking for the exact opposite of my little white spanish horse, I never thought I would fall in love with a warmblood.

It was the kind of love on first sight. A lovely small head, small, totally crazy and wild eyes - exactly my kind of horse, Hannovaranien breed. More opposite to my spanish one was impossible.

Granpa was happy, too - so this was the One!

Everybody, who could not already read it between the lines - I prefer horses with - let's say character.

When Despino was some weeks home, my boyfriend brought it to the point. He said he had already seen me with several strange horses, and usually he would be sure that I knew what I do - but this time he really was scared for the first time.

My new little horse had very concrete ideas of how to deal with humans - and how not. Somebody entering his box already was a big assault in his eyes. Leeding him through the yard, not so nice, he decided. Cleaning his hooves - prefarably not. And I do not even dare to talk about water.....:-)

When he was supposed to be neutered in the veterinarian hospital I was working at this time, I saw our anaesthesiologist walking in the direction of his box. Next I heard her scream and shout, and when I came around the corner just seconds later, my lovely horse was standing in front of her, on his hindlegs, totally calm, not even afraid. On his forehead written in big letters: Dare to move - I'll get you.

If I had not realized before - in this moment at the latest one could no longer deny to recognize this will become interesting.

Luckily, I already had decided anyway that he was supposed to grow up slowly, get a proper education in behaviour and give him a break until he was at least five years old and therfore something like grown up.

So he started to become a riding horse with 5 years, and after half a year of training, he went back to the field for another break of 8 more months because I was working too much. But this is another story.

In 2012, Despino is 9 years old, and the little one is now for approximatly 3,5 years working on a regular basis. I never regretted a single day that I have decided for him. Though we had some special happenings.... remembering his first weekend clinics, that were sometimes - interesting.

Oh yes, simple is something completly different from this horse.

He has a very strong mind, is taking his own decisions if he does not feel completly safe, wants to be guided though it is so difficult for him to trust.

Every mistake I do or I have done in his education is hurting me for at least some weeks. He is asking for my whole attention - from the first second he can see me until the goodbye-goodie.

He is not only my mirror, he makes as well my positive as my negative characteristics stronger and more visible - even for me. And if he does not like what he sees, does not feel like working or even beeing around with me for the next few days.

And exactly that is why he offers me the possibility to learn so unbelievable much, and I am thanking him so much for that. It is without doubt that we love each other without borders, enjoying to be together and decided for each other a long time ago - probably already on day one.

And, to be true - simple is for beginners, isn't it?